It's all part of the process. My first rejection.

Excuse the bizarre video, but this is the song in my head today.
So for the last week I have been feeling downright weird. Wired. Unsettled. Because I arrived back from my 3 week holiday, passed through my novel twice, the last read being an intense proof read, and submitted to the first six agents on my list. When I was at the stage where I was changing a word and then changing back again, I didn't linger over it. I'd already done my agent research so it was all ready to go.

As I pressed the send button I thought I'd be relieved or a bit empty, or maybe proud of myself and elated. Instead I felt as if the last 10 months have never happened and that I'd never written a book. I was in no-mans land. I drank too much three nights in a row and was pretty grouchy on the days in between. I worked on my next novel half-heartedly and researched pointless (but therapeutic) things like other peoples rejection letters and average times it takes agents to respond. I tried to limit my inbox checking and failed.

And now I have my first response. Stock rejection. From a huge agent. Used my name rather than Dear Author, but that's the only hint at personalisation. Sent from the submissions team rather than the named agent to which I addressed my (meticulously researched and checked) submission letter.

I wont be disingenuous here, rejection does feel a little brutal. The thousand or more hours you put in were not appreciated by whoever read it. I feel it's unlikely my precious even got past the agents readers. The film might not be in cinemas next year...

But it doesn't feel as brutal as I thought it might. I feel real. A real writer, who wrote a real novel must receive at least one, and probably a lot more than one, real rejections.

So I'm not sorry for myself really. I'm a real rejected writer. Before this I was in a bubble of daydreams, now I'm part of a real professional process.

I'm absolutely fine about being a reject. Just a co-incidence that when I picked up my guitar this evening I didn't turn on the lights and started playing Everybody Hurts by REM.

Posted by Antonia Lindsay at 12:48 No comments:

By now I had a first draft and I'd rewritten the first seven chapters. I was elated. I followed advice to take a break of a few weeks. I wish I hadn't.

I found this advice so difficult to follow as I was mid-flow, ideas materialising all the time and my characters finding their voices and their personalities as I wrote. In future I wont take a break at this point if I don't feel like it. I'll follow my instinct.

I was scared to leave my novel when it was going so well. So I fixed it in my mind.
I made record cards of my scenes. I enjoyed this. I colour coded them so I could see the different settings. I used coloured stickers for each character so I could track my subplots. It was really helpful. 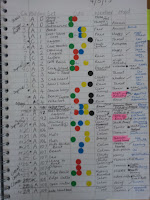 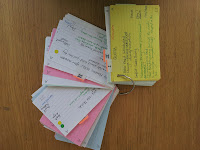 I could see how much space I'd given to each of my POV characters. I laid the cards out on the floor in chapters. I transferred the data to two A4 sheets.

I didn't really take a break at all. I read 7 books on how to write fiction (I'll review these at a later date). I ordered my copy of Writers and Artists yearbook. I read and analysed 5 young adult novels in my genre. I researched various aspects of my novel.

So I got to know my novel. I had it fixed. Now I had to completely rewrite it.


Posted by Antonia Lindsay at 09:39 No comments:

Whilst working on the early drafts of my novel I listened to a lot of music. Probably the album I listened to most was Barton Hollow by The Civil Wars. http://thecivilwars.com/
I also love to run to this track.


Music is really important when I'm writing. It creates mood and The Civil Wars are the masters of mood. Every track is undiluted emotion and conflict. And their new stuff is even better than the first album. I'm not going to chat on today. Listen to their new song below. Great lyrics. Can't stop singing this. And apparently the conflict is real. They have a lot of music differences and keep splitting up, cancelling tours, and stating irreconcilable differences.

It all went crazy. I found my precious and hunched over it in a dripping cave whilst my hair fell out and my skin turned grey. Not quite but almost.

I began an obsessive affair with my keyboard.

I had my idea. I had my synopsis. I had a 3 act structure and a scene summary.
I wrote. And I wrote. Line by line, scene by scene.
I wrote without looking back.
Following the theory that I needed words on the page, and it didn't matter much what the words were as long as they took me to the end. And they did. I used Scriv http://www.literatureandlatte.com/scrivener.php to help me keep some semblance of order. Around 300 hours later I had 82,000 words, no speech marks, little punctuation, no description. 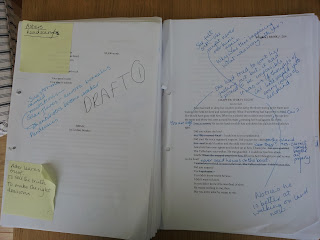 In this 8 weeks I wasn't pleasant to live with. I was Gollum. I couldn't stop thinking about my people (characters). They spoke to me night and day. I emailed myself at work with conversations, I wrote in the middle of the night in the notebook beside my bed. I scribbled notes before saying good morning to my real life beloveds. I wasn't present in any conversations. I hardly went out. I came in from work and wrote. I sacrificed a lot of sleep. This is first draft fever. Everything stops for the story.

But when I held the first draft of my novel  I danced till dawn.

Then I rewrote the first seven chapters because I could see now that they were total excrement and couldn't bear to let them be in my beloved first draft.

This was the point I knew I would be a writer. I knew it. My novel wasn't flying yet, but I was.

Catch How I wrote a novel Phase 4 Getting to know you, next Friday.
Posted by Antonia Lindsay at 16:06 No comments: